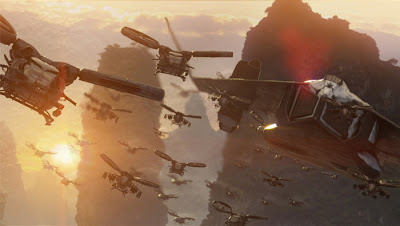 I HAVE SEEN THE FUTURE OF MOVIES-AND HIS NAME IS JAMES CAMERON!

I have just seen the 15 minute promo for AVATAR, and trust me on this-it will be THE movie of 2009

Now at the moment I don't sound like a 45 year old guy, I sound more like a pimply snotty nosed fan-boy kid who has just soiled himself rather badly

but I really do feel extremely excited about this movie as much as I did when I was 14 (In 1977!) and saw Star Wars for the very first time.

I watched the trailer on Friday, and was immediately hooked, and needed more straight away. We then watched a news report telling us of the very first screening in NZ (In Wellington-home of Peter Jackson & WETA) and the reaction of those viewers afterwards. So, when I see in today's weekend paper, that my local cinema (Less than 500 yards away!) is playing the promo footage-for free! - what do you think I did next?

Soon, we are there, getting our 3D glasses, in eager anticipation of what we're about to view. It starts with JC giving us a little preamble about what we are about to view-select footage from the first half of the movie only. And then it starts...

You will totally believe you are in another dimension. The clarity, depth of field, sense of realism is quite frankly, staggering. I have never seen such jaw dropping, eyeball watering visuals on a SciFi movie before

On the news report they mentioned that there is something like 850 people working on the visual FX alone! You can see where the money is being spent on this spectacle

. But, having said that, the storyline does seem like it will be a major component of this movie. That is one area where, unlike some big name action directors, Cameron does give a huge focus on how the whole thing works in its entirety.

Anyways, back to the stunning visuals... The alien designs, color palates, fluidity, sense of motion, contrast between foreground & background are just absolutely stupendous, to say the very, very least. One thing that seems abundantly clear to me is how much the designers (And presumably James Cameron) were in thrall to such visionary artists such as Roger dean & Syd Mead. The dragon-like bird creatures clearly straight off a YES album cover methinks

Not a bad reference point at all!

Come December 18th, there will be a mark made by this movie that will define all that have preceded it-and those who follow in its footsteps. It is going to be the movie event of 2009...

If you can, go and see this footage as soon as you can. You will not be disappointed

It clearly will whet your appetite for the main course to come...
Posted by Jamie at 12:05 PM