WHITE LIES: TO LOSE MY LIFE... 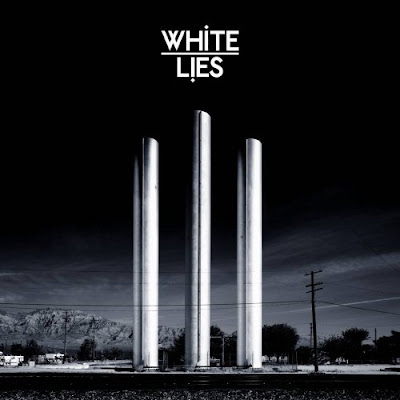 I love getting recommendations from friends, because you know one thing is certain. Whatever they are suggesting that you buy, watch or listen to, you know they are wanting you to enjoy it just as much as they have done. When someone is so passionate & enthusiastic about a particular band, album or movie, their infect you so well, that its really hard to say no!

So, when I walked into my favorite record store www.marbecks.co.nz, and asked my friend Bryan about what he could recommend, he had no hesitation in suggesting this young 3 piece from the U.K, the very promising new rock band, WHITE LIES. I wont bother boring you with the details about their history etc, instead I'll direct you to the informative wiki over here. Lets cut straight to the chase, to the stuff that matters most, the music...

1: Death. From the opening minute of insistent bass & drums, you know this track is going to explode later on-and wow-does it ever, soaring into the stratosphere with its impassioned vocal from lead singer Harry McVeigh. The opening line "I love the feeling when we lift off" sets the tone for the rest of the record, with its themes based around death, funerals, loneliness, dreams, fears, anxieties, missed opportunities and a whole host of life's myriad complex human emotions & feelings. Musically, the bands sound is, as many other scribes have noted, reminiscent of obvious influences such as Interpol, Editors, and yes, almost inevitably Joy Division. But there is one major difference. Most of the aforementioned bands have had the tag of 'Gloomy' attached to them at least once during their career, but although you could argue that White Lies sound like they belong with that bunch, their music is much more joyous, upbeat- euphoric so emphatically in fact!. This song has even made it to the status of 'Sing-along-classic' with its chorus line of "Yes, this fear's got a hold of me". Check out the Glastonbury clip on the band's homepage!

2: To Lose My Life. With its Joy division sounding drums, Fuzzy bass line, this propulsive track starts much like the preceding one, then launches into a great chorus, with another interesting couplet "Lets grow old together-and die at the same time". Yep, you can imagine this line being sung along with as well! (And that's not a bad thing either...)

3: A Place to Hide. 15 seconds of shuffling drums makes way for a shiny synth & bass riffs, followed by McVeigh intoning with his now familiar convictions about guilt, redemption-all "before the storms begin". Although a now familiar musical template is being set, each tune has a unique arrangement, one that is very welcome I'd add! This is the sound of a band confident in its abilities to create something different with each respective song.

4: Fifty On Our Foreheads. Slight drop in pace for the opening of track 4, the drums clattering away, setting up for the majestic sounding verse with its glorious keyboards, rich plump toned bass lines, and more soulful vocals from McVeigh informing us to "Start burning in the sky" And, is it me? Or did I hear a snatch of Joy Division's "Atmosphere" somewhere in there as well? I suppose if you gonna reference another band, might as well be obvious about your influences! Initially this track wasn't a favorite, but breaking it down to its parts reveals hidden qualities that cant really be appreciated with one or two cursory listens.

5: Unfinished Business. Opening with McVeigh asking for a second chance, and a church organ droning away, this track bumps up a gear when the chorus kicks in, with the expansive drum pattern throwing scatter-bombs in many directions. Then, with its galloping simplistic bass lines its picks up another gear, with bassist Charles Cave adding backing vocals to the main chorus lines.

6: E.S.T. The most obvious influence in this track is undoubtedly Joy Division, with its fat, rich Keyboard providing a foundation to build from magnificently. Although keyboards are an important part of the bands sound, they never overwhelm any song, instead adding a depth & complexity to the overall sonic template. A sound that would be very hollow if they were removed. Which does beg the question of why bands like this (And many others) never seem to like to acknowledge the pivotal role that keyboards bring to a bands identity, even to the extent that the keyboard player isn't always identified officially in a bands career. See Joel Sieglers fantastic Black Sabbath website for his views on the role of longtime keyboardist Geoff Nicholls!
Maybe guys, for album 2, give Tommy Bowen (Who augments the band on live dates) full band credit. Your sound wouldn't be the same live without keyboards...

7: From The Stars. With its serene String section sweetly setting the tone, McVeigh regales us with a story about a friend having some sort of personal epiphany during a funeral. Another thudding drum pattern laying a solid foundation for the strings to start soaring higher during the following choruses. One of my fav tracks on the album.

8: Farewell To The Playground. A great sharp rhythm guitar riff drives this snappy driving number, with another memorable sing along chorus to keep live fans happy! "Keep on running, keep on running, there's no place like home"

9: Nothing To Give. A moody sombre introspective number, with McVeigh wishing "That I've got no regrets" and "I've clung to time like gold", this ballad is a nice step back from the rockier moments prior to this song. One of McVeigh's most dramatic & impassioned vocal performances thus far in his career, one can imagine other future songs in this vein being well received.

10: The Price Of Love. And saving the best for last? This powerhouse rocker (With a trademark slow intro) is another classic, with all of the now familiar WHITE LIES trademarks in place. Soaring, melodic, passionate vocals; driving, throbbing, thudding rhythms (An rather excellent Entwhistle-like bass riff detected!); crunchy biting guitar lines; full rich strings section complementing the keyboards. All of these come together so perfectly in this fantastically arranged track that probably is already a fan favorite!