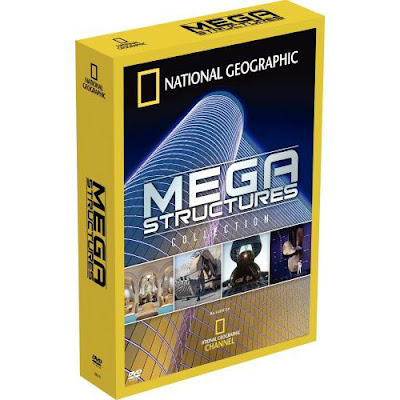 Plot Summary: Fascinating series of documentaries on how big-sized construction projects are made, and the amount of planning, commitment, money, time, luck, and sheer hard work that is needed to make these iconic structures what they are today.

Ever since a very young age, I've always been very interested in how things work, especially electrical/mechanical objects like cars, aircraft, bridges, buildings and so on. I guess living near a military base (Dad was in the RNZAF) and seeing jet aircraft wizz overhead constantly helped fuel my imagination! Its no great surprise to tell you then that a big part of my working life involved fixing photocopiers, faxes, printers & typewriters. I job I really loved doing for 15 years or so. And that interest hasn't waned in the slightest, I am still very curious to know exactly what it takes to make something work-even more so when the scale of the project seems too incredible for words.

When ever you drive across a major bridge, or take a ride on a big aircraft or ocean ship, pause for a minute or two and reflect on the technological marvel that you are using to travel from one location to another. It is staggering to say the least when you actually learn of the process from the very inception of the initial idea, to the official opening to the general public, the major faith you need to place in the professionals who build these extremely complex projects to a level that is deemed safe for the general public to use on a daily basis. It shouldn't ever be taken for granted.

However, before you get too interested in this series, a small word of caution. Having searched on both Nat Geo's & Amazon's websites, it appears that there is only a 'best of' 3-4 disc set available from the 3 or 4 seasons shown so far. So, you will have to be a cable, sky or similar type of subscriber to actually watch the damn things. I figure if both the Nat Geo & Amazon sites don't have more than just the 1 meager offering, there must be some sort of licensing issues tied up with the rights to this series.

Some of the episodes I've watched are as follows:

Season 1
Ep 1: USS Ronald Reagan-The worlds biggest aircraft carrier. Never realised just how complex these floating airports really are. With a crew of 6000 people, carriers can stay at sea for more than a few years.
Ep3: The Channel Tunnel. One of the most difficult tunneling projects ever undertaken. Connecting Britain & France together, this highly technical challenge involved digging in very soft soil, with the danger of collapses a very real threat. A staggering achievement for all those who worked on this impressive project.
Ep5: Kansai International Airport. With no free land available, the Japanese put their very creative thinking caps on and came up with a seemingly impossible idea-build a massive island out of landfill in the middle of the harbour-and then hope it doesn't sink too much in future years to come! The jury's still out on that aspect, but it is undeniably a major technological achievement.

Season 2
Ep 19: The North Sea Wall. After centuries of devastating floods, the dutch government was compelled to build a vital sea wall to combat the effects of the destruction that floods wrecked on the dutch people and the Netherlands economy. Its scale is immense-but the problem wasn't going to be solved by half measures either.
Ep 20: Dubai's Palm Islands. Like the Kansai airport problem, Dubai has a major lack of land-specifically sea frontage, so the only solution was to reclaim land and position itself post oil boom by making it a iconic tourist destination. Again, the scale was staggering, and then unbelievably, they have made an even bigger island (Rather groups) in the shape of the world map. So, if you have a few million or 50, Brazil, Australia, or any country you want could be yours! Probably, not the last thing these clever buggers will attempt to make...
Ep 34: Millau Bridge. This vast bridge is also now the tallest in the world. And it is a stunning engineering miracle that has to be seen to be believed.

Season 3
Ep 37: Rio-Antirio Bridge, Gulf of Corinth; Greece. Another extraordinary bridge that is built in an extremely challenging environment.
Ep 38: Oresund Bridge, Copenhagen-Denmark to Malmo-Sweden. This bridge linking 2 countries is another triumph of man's battle vs nature, and the opportunities that were afforded to both countries by this significant link.

Other eps (Cant find any season/ep data) that I've seen are:
Deep Sea Drillers: The accuracy needed for ocean drilling is precise-so are these machines
Maglev Trains: Maybe the future of trains, catastrophes notwithstanding.
Queen Mary 2: That it works at all is a major accomplishment.
Beijing Olympic Stadium: The birds nest is now an icon of architecture without question.

Regardless of the lack of easy access, if you are able to watch the series, then it is wholeheartedly recommended!
Posted by Jamie at 3:59 PM