The Master of Melancholy 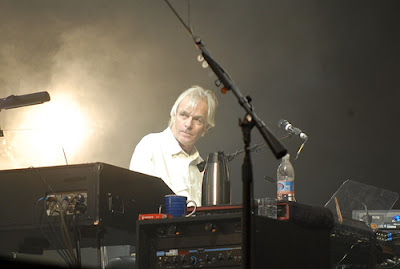 Hanging on in quiet desperation is the English way
The time is gone, the song is over,
Thought I'd something more to say...

Whenever I've thought about Richard Wright-for reasons that I still can't really explain even to myself, I always come back to these rather poignant lines that in light of his recent passing, resonate with ever increasing assurance. To me, they reflect the true essence of his personality. Of all the various Pink Floyd personnel, perhaps Wright was in retrospect, the real enigma.

Roger Waters & David Gilmour were the defacto leaders of a band who accidentally muddled their way into the major league of rock 'n roll superstardom-even though in true Floydian style, neither were exactly proto-typical rock stars. Their relationship was of the Lennon/McCartney or Jagger/Richards mold. A pair of seemingly opposites paired off to write some of rock 'n rolls most iconic music. But crucially, this pairing almost always came with a strict proviso. The more successful they became, the more other band members were relegated to the back row. "Shut the fuck up and just play your fuckin instrument" would be just one of many insults hurled at any poor hapless soul who happened to think that they may have a better song idea than their ego driven songwriting duo! Other notable casualties of this type of egomania would be people like George Harrison (Beatles), Don Felder (Eagles), & the rest of Creedence Clearwater are just some examples of where true democracy didn't reign properly for these frustrated musicians.
It should be noted that Waters & Gilmour weren't that egotistical about such matters, until Rogers vision began to dominate the band, then Gilmour pushed back. Unfortunately Mason & Wright were less inclined to do the same.

Post the Syd Barrett era, The Floyd were initially a fully fledged democracy, every band member brought an equal amount of musical invention to create their evolving potent brand of musical genius. But as the years went by, the workload was falling more and more onto the shoulders of Gilmour & Waters. Nick Mason & Richard Wright either becoming increasingly daunted by the competitive talents of the guitarists-or deciding that because they were so good, why stand in the way of such greatness? And thus, not only the songwriting contributions dropped off, but even the occasional lead vocals from Wright were getting harder to sight. This is a great shame, considering the unique voice that Wright has; a gentle plaintive tone, full of life's anguish and melancholy. Typically, his understated songs reflected that sensibility, songs nostalgic for a simpler, less complicated life. Great examples of this are "Julia Dream" & "Remember a Day"

Crucially though, its in some way irrelevant to a certain degree about the lack of songwriting & vocal contributions because Wright did leave his indelible imprint to the history of rock for posterity with his signature keyboard work for the Floyd. His playing was absolutely vital and perfect for the Pink Floyd sound & it was also unlike many of their contemporaries such as YES & ELP who both had virtuoso musicians who weren't afraid to play a solo or 2. Whereas Rick Wakeman & Keith Emerson were both dazzling entertainers, Wright never put flashy showmanship ahead of making a composition sound better. He utilized more textured and nuanced fills, runs and sequences to give the Floyd their signature sound. Indeed, so instinctive and complementary is his playing, that it never threatens any track by overwhelming the balance of instruments in any particular song. If you took away Wright's sublime playing & compositional abilities & the Floyd wouldn't have sounded as great as they did. His part in the success of Pink Floyd was undeniable.

In my humble opinion, the best Pink Floyd Track ever is the sublime 23minutes & 31 seconds that is "Echoes" . That it is the quintessential heart of the typical Floyd sound is both a nod to the past-and a major hint to the future to come. One can only wonder if the band had continued along this kind of musical journey more often, where it would have lead them to. Key to this tracks inherent greatness was the fantastic interplay between Wright & Gilmour. Their vocal lines are in sync, each soaring to greater heights than previous vocal partnering in older Floyd songs. From the opening 'ping' (A note played through a Leslie speaker-Which has a rotating speaker in its housing), this track takes the listener on a voyage to distant shorelines, labyrinths of coral caves, outer space via eerie slides on bass guitars, and interstellar majestic guitars...
This song was the best thing that Richard Wright ever did with the Floyd, his organ swells are just breathtaking in their exactness of what the track required. The opportunity to do a overblown solo must have been very tempting, but Wright successfully resists this and infuses Echoes with a sound both majestic and otherworldly.

If you haven't already done so, I strongly urge you to go and buy a copy of David Gilmour's "Remember that night" DVD. Wrights playing is magnificent throughout the whole concert. He makes a remark in one interview saying that this is the happiest tour he has ever done-and it clearly is no idle throwaway line either. Wright has a look of absolute contentment throughout the whole tour. One can only now sadly speculate on the possibilities of a reformation of the Pink Floyd-and what it might have done for Wrights desire for a often longed resumption of recording with the under the Pink Floyd brand again.

In one of his last ever print interviews, he mentions to the journalist concerned that he whiles away a lot of time, just playing his piano, his one true companion. The one thing he could always rely on for emotional support & therapy. It would interesting then, to hear more of what was in his head. If Pink Floyd songs submerged his true feelings, then perhaps solo recordings would reveal the real Richard Wright. Maybe, some day we will be lucky enough to hear some of these pieces, then again, maybe we shouldn't.

Lastly, here's my list of my favorite Wright contributions to Pink Floyd.

From: Piper at the gates of Dawn; Astronomy Domine, Chapter 24, Interstellar Overdrive

From: Saucerful of Secrets; Remember a Day, Set the controls for the heart of the sun

From: More; Cirrus Minor, Up the Khyber

From: Dark Side of the Moon; Time, Great Gig in the Sky, Us and them, Any Colour You Like

From: Wish You Were Here; Shine on you Crazy diamond (Pt's 1-9), Welcome to the Machine

From: The Division Bell; Wearing the Inside Out