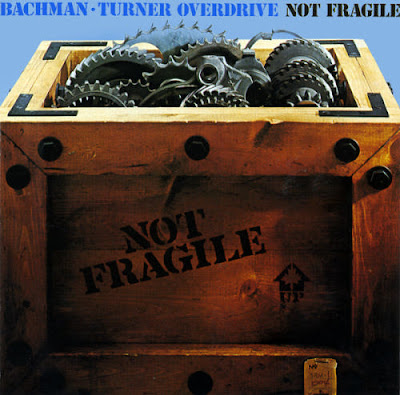 Call me old fashioned when it comes to what types of music I really love, but I just can't ignore the truth staring bluntly back at me. I was born in 1963 (Near the last of the "Baby-Boomers") so my formative musical appreciation started in the early 70's, listening to A.M radio, then it changed completely in 1977 when I started high school. Man, was this such a great time for music! I mean, just where do you start? Luckily for me, I was able to enjoy all different genres of music, but I always came back to my now favorite genre-ROCK!

And somewhere near the top of my favorite rock bands is this bunch of Canadians known as: BTO (Bachman-Turner Overdrive). My introduction to these guys was via this superb (And vastly underrated LP) Album "Not Fragile" which was 1st released in 1974. My great friends Mike & Greg B's mother Anne was the owner of the LP, which the guys introduced to me around 1975/6 (Or so-hey, we're talking some 33 years ago!).

And its impact was devastatingly immediate! I just wanted the guys to "Turn the fucker up louder" on numerous occasions. From the opening bass intro of the title track, till the last stinging blue notes being peeled off from Randy & Blair, this muthafucker ROCKED!!! This LP can be described in one word-Muscular. Its made by men who were on a mission to spread their brand of high octane powerhouse boogie to a thriving live scene in the halcyon days of the American rock experience. The band had a great work ethic, and truly put their hearts & souls into converting non-believers into rabid life-long worshipers. It is a great shame that to date, there still isn't an official Live DVD of one of their seminal 70's concerts available. Even judged by the other staple of the 70's-The ubiquitous "live Album", sadly they fell short in this critical area as well. Its is well documented with some bands, that the truest recording that represents the quintessential sound of the band is best personified by the live LP. Some great examples would be Deep Purple's "Made in Japan" , Thin Lizzy's "Live & Dangerous" & Peter Frampton's "Frampton comes Alive" Perhaps history would have looked slightly different if they had delivered such an album. Regardless of this minor quibble, they still left us with this monstrous slab of piledriving, sledgehammering badass boogie that for me, has aged incredibly well!

A Pre-History of BTO firstly...

Randy Bachman was an integral part of one of the iconic Canadian bands in the late 60's "The Guess Who" singing, playing guitar & co-writing some of their most enduring music, tunes such as These Eyes, Laughing, Undun, No Time, And the provocative American Woman. After leaving this band, he formed Brave Belt with early Guess Who singer Chad Allan & younger Bachman brothers Robbie & Tim. Upon hitting the road to promote the album, they enlisted the talents of C.F (Fred) Turner to solidify the touring version of this band. But the country-Rock sound wasn't really working for them. With Fred's arrival however, they began slowly morphing towards the now recognizable signature BTO Sound-Heavy, pounding, riff orientated driving rock & roll boogie, with Fred's unique "Gin & Tears" vocals making an immediate impact on their audiences. After numerous record company rejection, fate dealt them a kind hand. A demo Randy had hawked around missed the rubbish bin in the Mercury records office of Charlie Fach, who had always liked what Bachman had done. He signed the band straight away with the proviso of a name change. Both Bachman & Turner had toyed around with using their names in some way, but one day in a truck stop, whilst getting supplies for the road, they noticed the American trucking industry magazine Overdrive. Eureka!, this was exactly the name that most effectively conveyed the type of music they were playing & thus the world now had BTO.

After 2 reasonably well received LP's, it was time for another change, Brother Tim making way for Blair Thornton, a guitarist with skills more than equal to Randy's. This was now the line-up that would record their masterpiece, NOT FRAGILE.

Side 1
1) NOT FRAGILE: From its ominous & precise bass intro, this piece of music was intended to do only one thing-Remind the listener that they most definitely were not listening to a YES Album! (Yes had recorded the Fragile Album 2 years earlier). This opener is unrelenting with its propulsive grunty guitar riffs monstering everything in sight. Add Fred's vocal scream and Wow, this is a masterful statement of intent! One of the most perfect album opening tracks EVER.
2) ROCK IS MY LIFE, AND THIS IS MY SONG: Randy's autobiographical track about his life on the road, and his relationship with that aspect of his life. This initially deceptive track starts out with a jazz styling, but soon erupts with a familiar heavy guitar riff less than a minute in! BTO's innate sense of dynamics is superb in this great tune, the Rhythm section providing heavyweight ballast for the guitarists to blaze all over with well judged solo's and melody lines.
3) ROLL ON DOWN THE HIGHWAY: C'mon people! Is this not one of THE quintessential rock & roll songs to drive to in all of recorded history!!! Every single time I have listened to this powerhouse track I never fail to tap my feet, hands, sing along-and if I'm driving, put the foot down more on the gas pedal! From the opening riffs, to the rock steady pounding drums, this is probably the best track to introduce a person to BTO with. It has all the signature elements of the BTO sound, and crucially, it ROCKS LIKE HELL!!! Bloody hell, I think I even typed this faster than the previous tracks...
4) YOU AIN'T SEEN NOTHING YET: Unbelievably, this initially wasn't a proper track at all, just Randy fooling around in the studio, adlibing over a recently written riff (Or 2). When the engineer suggested that it might actually make a fully fledged song, Bachman took some convincing before eventually agreeing to see just how it might pan out. Luckily for us, and the band, this would become one of BTO's biggest hits! Sometimes, musicians just can't recognize a hit-even when its staring at them in their faces. A hypnotic jazzy riff in the verses is well counterpointed by a concise riff in the chorus, the track shuffling along well with Randy's stuttering vocals & Robbie's drums underpinning this monster hit.
5) FREE WHEELIN': A progressive jazz-fusion influenced instrumental that features a waay cool solo section where every member gets a few bars or 2 to solo on! It was the early 70's o.k? This sorta thing was more than acceptable in those days!

Side 2
6) SLEDGEHAMMER: A perfect example of the difference in both the vocal & guitar sounds that BTO made. The intro verse has randy singing the opening lines with a jazz riff, then followed by CF's 'Sledgehammer' scream and a titanic guitar riff roaring into view. A stellar Yin & Yang BTO song, which pretty much "Sledgehammer"s you into submission...
7) BLUE MOANIN': Bluesy to the max, this underrated number features some excellent solo guitar workouts from Blair Thornton & guest Frank Trowbridge on Slide guitar. A great mid tempo rocker that probably was an excellent live track.
8) SECOND HAND: Another vastly underrated album track that has a lot going for it. Randy singing very much like CF ironically, a squalling solo from Blair, great main riff & arrangements make this track hold up well on closer inspection.
9) GIVING IT ALL AWAY: the album closer is another relatively unknown gem, one of the few tracks where both Randy & CF sing in tandem-throughout the length of the song. It opens with multi layered guitars chiming in unison, then the boys start bellowing the words out in earnest.
The bridge section where they chant the chorus over the drums is cool, followed by another great Blair solo, the track fading out to echoes of not fragile.

So, if you've never heard this album before (In its entirety) then, its kinda obvious exactly what I would suggest next...

This isn't the last 70's album I will be raving about either!