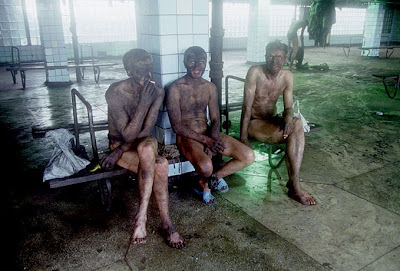 If you have ever had a day or two when you just want to chuck your job in because of the pressures & stress that it brings, then maybe it might be beneficial to watch this movie first. If you think that your own job is hard, then, in the words of Randy Bachman "You ain't seen nothing yet"!

This Jaw-Dropping film was utterly stunning on the big screen, but crucially its power is not diminished by viewing on a reasonably sized TV. Although the majestic & imposing industrial landscapes are intrinsically linked to the majority of jobs, they don't overwhelm the viewer either. Impressive as they are, the backdrops take second place to the people going about their day, doing the jobs you wouldn't really put high on the list of desirable career option's.

Ukraine: Illegal coal mines
Starting with one of the most claustrophobic jobs-working in a mine, we meet a group of Ukrainians faced with no option other than to work a long discarded, derelict mine that the state has deemed unprofitable. Based in a ghost shanty town, way passed its prime, our hardy souls chip away in the darkness and cold, for a few meager baskets of the precious black stuff.
With the constant threat of imminent collapses' a very real everyday possibility, these exceedingly brave comrades beaver away with no real reward in sight other than the most basic of human needs-survival. I absolutely felt like I was inside the mine at times, and felt a great deal of empathy for the miners doing this wretched job-on a daily basis.

Indonesia: Kawa Ljen-Sulfur mining
From the tight confines of the Ukraine mine, to the unbearable vapor from the Kawa Ljen Volcano that these unbelievably heroic Indonesian workers toil away in. In Eye-stinging, throat burning scenes that seem like a vision of hell, this bunch of guys are without question, the very definition of brave. From the tricky, slippery descent into the volcano's bubbling lake to chip away at the precious sulfur deposits, to the hair raising climb out, and the gut busting run-back down the mountain, they 'walk' an incredibly dangerous line. At any second, you really fear that impending disaster is but, a footstep or 2 away.

Nigeria: Port Harcourt-Slaughter yard
If you're a vegetarian, then this next segment will be incredibly tough to view. If you can stomach the very real scenes that are presented before you, then you are indeed, both brave and strong willed. I do know that animals are killed in slaughter houses, to be converted for mass production & consumption. Even so, I was totally unprepared for just how hellish, disgusting and nightmarish this place was. If, like me you have viewed this on a cinema screen, then you will understand what kind of an impact, viewing this ghastly vision on a giant canvas can have. Viewing this screen on a TV doesn't lessen the impact either! Mercifully, we don't get one critical sense to make more of an impression-the sense of smell. I can only begin to imagine just how this place would actually smell. And lastly, Blood. If you can't handle seeing a lot of blood, then again, this is another bloody tough (Pun intended!) segment to watch.

Pakistan: Gaddani-Ship breaking
Health & Safety would have a field day with the Dickensian conditions here on a desolate Pakistani beach. Here, is where all the worlds shipping firms send their old, unwanted, obsolete & unprofitable ships to 'die' as such. Beyond brave, teams and teams of extremely poorly paid migrant workers toil very long-and very hard, to break these massive vessels apart, to be sold as scrap metal. All this taxing, back-breaking work is done the old-fashioned way. By hand, with next to no modern machinery to help in this most herculean of tasks. You cannot for a second, imagine any western worker (Used to safe working conditions, Unions, benefits, etc) comprehending the type of person who would willingly work in such shitty conditions!

China: Steel workers
Lastly, and maybe for a sort of 'light relief', we head to China to watch workers toiling away in a massive shipyard-or steel factory. By comparison, these guys (and the odd woman or 2) have it damn easy! Although, undoubtedly this work is physically demanding, when you've just watched the 4 previous jobs, this must seem like a walk in the park to some. Obviously, its not, I think that director Micheal Glawogger purposely put this part near the end to illustrate that maybe not all jobs are without some kind of hope for a better future. And China is a great example of just where the working world is heading in the 21st century. Working hard to create a new future for your country's prosperity.

Coda: Germany-converted smelting plant
To portray just how far we've come in the evolution of work, Glawogger highlights the old ways converted into the new future. A massive Iron-smelting plant converted into a showcase leisure park for all the public to use and enjoy. Probably not how the original owners would have ever seen this behemoth being used, but it is a testament to man's ability to rethink how we use a major building-and the benefits we can get from using it altogether in a completely different way that is more conducive to the future of humanity.

The real power of this movie is watching these ordinary people doing the most uncomfortable, back-breaking, mind-sapping, filthy, claustrophobic task's in all of humanity. Easy, these job's were never meant to be, but someone has to do these dirty jobs! So, next time you come across a grumpy customer, take a deep breath, remember they are paying your wage, smile and think of all those poor buggers doing the types of work in this movie.