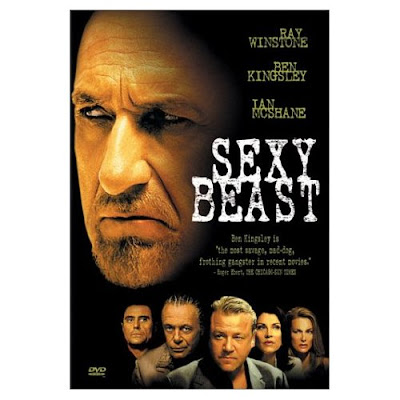 Plot Synopsis: An enforcer is sent to sunny Spain to recruit a rather unwilling former employee for one last job. Needless to say, he's not really that enthusiastic about this but, Don Logan is not a man you say no to-YES! YES! YES! would be more in line with what he wants to hear from this somewhat reluctant former employee . Perhaps he needs just a little encouragement...

When I first saw this movie, I watched it with my girlfriends parents. Which was either incredibly brave or just plain stupid! Because as those of you who've seen this tour-de-force masterpiece, its not-shall we say-a family movie. The intensity of unbridled rage is impossible to ignore, from the moment the boulder narrowly misses 'Gal', to the very end of this film, it is a compelling train wreck that you can't take your eyes off.

When you think of iconic movie villains-prior to this movie-probably you wouldn't have picked just what Sir Ben Kingsley was capable of in this role. On the one hand you have an image of him as Mahatma Gandhi-A much loved icon of peace & compassion. Well then, get ready for a massive reappraisal of his screen image as you confront his evil polar opposite-Don Logan.
Unquestionably, this bravura performance is a role that most actors typically would kill for.
Its always courageous to take on a part that will make people do a double take. To get out of a comfort zone is probably the best thing for an actor-just look at Robin Williams. Ever since he did Insomnia, One Hour Photo & Death to Smoochy I now look at him in a completely different light.
Although Kingsley's Don Logan is undeniably the main focus, the rest of this fine cast don't disappoint either. Ray Winstone as Gary 'Gal' Dove is a perfect foil to Don Logan, Ian McShane exhibits the same brooding menace that he did as the Cutthroat Al Swearengen in Deadwood.
The other parts are aptly played by James Fox as the top boss, Amanda Redman as the ex-porn star wife, and Cavan Kendall as Gal's best mate.

This pulse pounding, heart stopping powerhouse of a movie will absolutely make you see Sir Ben Kingsley in a completely different way from now on. Its Shakespearian dynamics make it a enthralling watch from start to finish. Gandhi? dead, buried, completely and utterly obliterated by Don Logan.