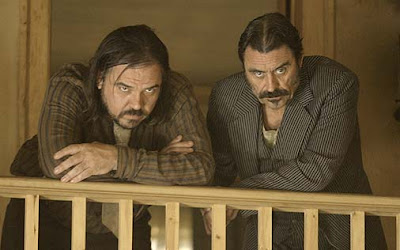 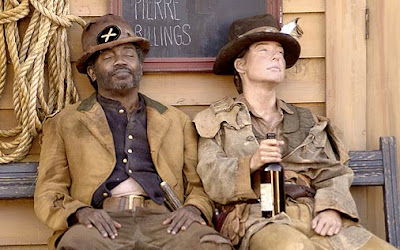 Plot synopsis: The trials & tribulations of life in a lawless frontier town in the gold-laden black hills of South Dakota in the 1870's are recounted in this landmark TV series. It explores in great detail, the myriad of murky, convoluted, complex relationships of the protagonists all trying to either make a name for themselves-or just trying to do whatever it takes to survive another day. No mean feat for a town with "No law at all?"

First I gotta mention the goddamn fucking language, COCKSUCKER!!!
Now, having got that out of my system, here's the only real proviso with this Show. If you are easily offended by foul language, then you probably wont last more than 10 minutes before your reaching for the stop or mute buttons on your remote! The language is necessarily brutal, raw and violent in it's tone, volume, delivery and conviction. The language is the key thing that divides people with this series. Either you accept it, or you don't watch it! For me, it is absolutely critical to have such weighty, intense & uncompromising dialogue in a show of this kind. It feels right for the extremely high level of profanities to be an essential part of Deadwood. It wouldn't be right if the characters behaved toward each other like they would in an Merchant/Ivory movie! So, if you can accept the language-read on...

One of the very true things about casting a movie or TV show, is that if you get the casting right, the rest takes care of itself. Deadwood does this in spades. Every single actor is justifiably well cast in their particular role. And it's not only the main 'Stars' who are great. Without exception, I do believe that the shows architect - David Milch - got the casting of the supporting roles spot on as well. All these characters on the periphery all have a moment or several scenes to shine & add more depth to the often complex dealings that take place in any given scene.
Some of my favorite supporting cast are: E.B Farnum - huge kudos to William Sanderson for creating one of Deadwood's best characters. Every time EB appeared, it was always entertaining to say the least. More often than not, EB regularly got shat on - mostly from Al, but he was fair game for an ear bashing-tongue lashing bollocking from all and sundry. But, Sanderson managed to create a very human character because more often than not, ya felt sorry for the sucker! Some of his lines/spiels are amongst the finest delivered by any Deadwood cast member. Also very memorable is E.B's Hotel hand Richardson. In the 1st season, he barely gets a mention, however, slowly but surely, his character creeps into view with a pithy line, or look on his face that is just perfect for the situation. Finally in season 3 Richardson gets longer scenes & more lines and that just makes him ever more watchable. Maybe they should of had a spin-off show featuring E.B & him!
Next actor to single out is Robin Weigert & her interpretation of Calamity Jane. My god, what a role that so many actors would kill for - and Weigert completely inhabits the role with such gusto its very hard to watch her in another role without comparing her to this one. From the first time Jane opens her mouth, any sense of familiar badly under written female roles is well and truly forgotten as she unleashes her spectacularly explosive personality on all who cross her path. Hell hath no fury with her permanently boozed-up train-wreck attitude. Cussing & fighting all and sundry. You do get to see a more compassionate side to Jane as well, and Weigert's portrayal of the more feminine half is just as arresting as her dark side.

Inevitably, a show's success does hinge on the main characters. You either have to relate to them, or be blown away by the performances. It helps that Milch got the two main lead roles superbly right. Timothy Olyphant & Ian McShane as Seth Bullock & Al Swearengen respectively are utterly riveting and tear up the screen with bold, dynamic, and well judged acting performances that are simply beyond compare. The best thing that both actors bring is a great understanding of the massive moral complexity, and perhaps more crucially, the moral ambiguities that each character is saddled with. This burden manifests itself in a multitude of ways and you constantly ask yourself the question of exactly who is supposed to be the bad guy here? Both characters alternate between deeds of magnificence and deeds of extreme malevolence! And the scenes between Bullock & Alma. The scorching hot sexual longing they have for each other produces some incredibly tense moments that are in turns, enthralling & uncomfortable to view. Listen to the very funny audio commentary on episode 12 (season 1) between Olyphant & McShane which does highlight what I've mentioned very well ! Clearly, they were having fun that particular day.

The other keys factors for Deadwood's success were in the incredible attention to detail in recreating the look and feel for the time period & the foreboding environment. You can see where all the money got spent. The sets (both interior & exterior), the costumes, the lighting, everything looks and feels right. It doesn't feel fake like some shows can.
The music is very evocative and isn't overused either. A great balance of sympathetic songs & instrumental pieces add considerable flavor to great effect. The soundtrack with the naughty dialogue is well worth purchasing as well. I always fast-forward to where the Al-Mr Wu interchange comes up. "Who stole the f@#king dope?!?!? C@#&SUCKER!!!"

This utterly compelling landmark TV series is without question, one of my all-time favorite shows. Everything about it is goddamn near perfect. The sets, the writing, the acting, the dialogue, the pacing, the story arcs - everything about this sublime show just reeks of outstanding quality. Once you start watching it, you wont stop until you've watched all 3 seasons.

It is, in my opinion, one of the truly great American TV Series of all-time!
Posted by Jamie at 9:09 PM