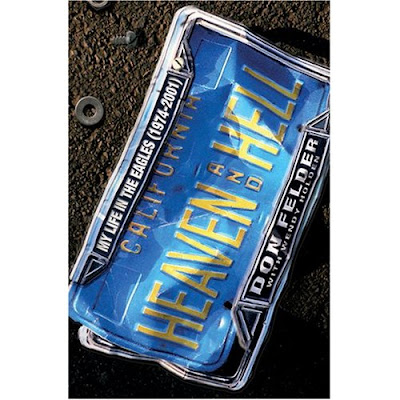 Book Summary: Guitarist Don Felder's biography of his life with a major emphasis on his often tumultuous time with one of popular music's most successful bands: The Eagles.

I've been catching up with a good mate of mine-Mike, who like me (And being a similar age!) loves music from the seventies. Can't really deny the era in which you first really got hooked on music. I for the record, just love this era ! So many great bands, great albums, great singles & great creativity & diversity as well. But before I get too sidetracked on this fantastic era, one of my most treasured records was: The Eagles Greatest Hits 1971-1975. It got severely thrashed at many a party! So, when Mike told me about this book he got as present-and how bloody good it was-I was not going to say no to his offer to lend it to me after he had finished with it. And boy, was I glad to read it. Completely changes the way in which I now perceive The Eagles-and their music.

Don Felder, out of all the various personnel that have been part of this musical juggernaut, was the most uniquely positioned to comment on what it was like to have been a part of such a mega-successful band. 2 guys preceded him (Multi instrumentalist Bernie Leadon & Bass Guitarist/Singer Randy Meisner), and 2 have joined after Felder-Bass Guitarist/Singer Timothy B.Schmidt & Guitarist/Singer Joe Walsh. The two constants are: Don Henley & Glenn Frey (Sarcastically termed "The Gods" by long suffering crew members-and many others as well).

This easy to read book has 3 main parts. Felders upbringing in a dirt-poor part of Florida in the early 50s/late 60s, His life with The Eagles (1974-2001), and life post Eagles.

With his formative childhood beginnings we learn that through his fathers love of old Jazz, how that captured his imagination and made him want to do something musical. So after trading some firecrackers for a beat-up guitar from a friend, he obtained his 1st guitar. From that, there was no turning back. He got so proficient within a few years, that he graduated to teaching guitar to other willing kids. One kid who showed promise was a buck toothed skinny little runt by the name of Tommy petty! After wooing his Childhood sweetheart Susan, they moved to New York to pursue his burgeoning dream to make a living from making music. Within a few years, without much luck in making a decent living, he gets a break & makes a life changing decision-to move to California. And so started his wild ride into rock stardom. Within a year, he got an offer he couldn't refuse, through rekindling his childhood friendship with Eagles Guitarist Bernie Leadon he was asked to provide slide guitar for the track "Good day in hell". The Eagles at this stage were looking to beef up their sound-slowly but surely, moving away from their country-rock beginnings-and Felders more rock orientated guitar licks were just what they needed.

Felders arrival in the Eagles ironically forced Bernie Leadon to realize that this new sound wasn't something he wanted to be part of. Leadon was pretty fed up with the increasing debauchery & uptake in drug usage so he departed a year after Felders arrival. Next guitarist, one Joe Walsh-who was considered before Felder. This cemented the bands new heavier rock direction.
Next to be booted out after being severely marginalized was Randy Meisner-again fed up with the bands incessant bickering & the Gods' increasing dominance of the songwriting. Enter Timothy B. Schmidt, happy just to be part of the now huge operation.
One lazy afternoon at home with his family, Felder started mucking around on his guitar. A little while later he felt he had something good. So he brought it to the studio & played it to The Gods-who declared it sounded like "Mexican reggae", but nonetheless, thought it had something, so Henley took it away and wrote some lyrics. The song was "Hotel California" . Ka-ching ! that's the sound of mega-bucks being made with probably the definitive song about California in the seventies.
Next came the protracted sessions for what eventually was the bands swansong at that time, the often underrated "The Long Run" album. Hotel California aside, this for me is where Felder really shines as a guitarist. With a great musical sparring partner in Joe Walsh, he was able to construct some great guitar workouts. My favorites are: Track 4-The Disco Strangler. Monster competing opening riffs between Felder & Walsh make this one of the heaviest tracks that the Eagles ever recorded. The only nit I have to pick is its way too short! I could easily enjoy a real long workout which lasts for 8-10 minutes-or more! Track 5-King Of Hollywood. Reputably based on the life of notorious Hollywood producer Don Simpson & his contemptible treatment of budding young Hollywood starlets, this is the extended guitar epic the aforementioned track isn't. Clocking in at 6.28, this slow brooding diatribe against Hollywood features 3 great solos as well as extremely cool rhythm guitars chiming underneath. I would love to have seen this being played live! Track 7-Those Shoes. Features Felder & Walsh playing Talk box guitars. Again, this is another criminally underrated slow burner that has aged well. I must check out from any eagles sites whether they did include these 3 album tracks in concert.

Ultimately, The Long Run wasn't aptly named-the band quit a year after its release, all the drugs, egos, disputes, bickering, antipathy finally succeeding in taking the Eagles out of the music industry. But yes, "Hell freezes over" very easily when people start adding significant zero's to offers for you to reform 14 years later! With an older but wiser, drug-free mind, Felder started to ask more about the accounting procedures unique to the Eagles, and basically got told to mind his own bloody business. It was the Gods' songwriting that really made the Eagles-as far as they and the bands manager were concerned. The rest of you merely contributed the occasional song in addition to what you played & sung on. If Walsh & Schmidt were happy, you should be happy as well "Fingers" (Freys nickname for Felder's considerable ability on the guitar). But, with a new royalty plan being devised for the new intro on "Hotel" on the "Hell freezes over" video amongst other new ways of separating the financial rewards, Felder finally found his voice & spoke out against the perceived unfairness of it all. Which promptly got him fired! Much to his bitter disappointment.

Felders story is the first from the inside of what it was like to be part of one of popular musics most iconic bands. His story is unique for his context within the band. Bought in to make the band sound more rock than country, he was an integral part of their success. Perhaps, they might not scaled the heights they did, if Felder didn't get "Hotel California" past The Gods' initial reluctance/skepticism to use songs other than which they had not wrote themselves. But history has recorded that "Hotel California" is a now quintessential part of the musical landscape.

So admit it Don & Glen. The Eagles wouldn't have been the Eagles without the fantastic contribution that Fingers Gave to the band.

It would be a major sin to think that history couldn't repeat itself, that "Hell could freeze over" one more time-for Fingers to be something he really wants more than anything else in his life. To be flying with "The Eagles" once more...
Posted by Jamie at 9:22 PM