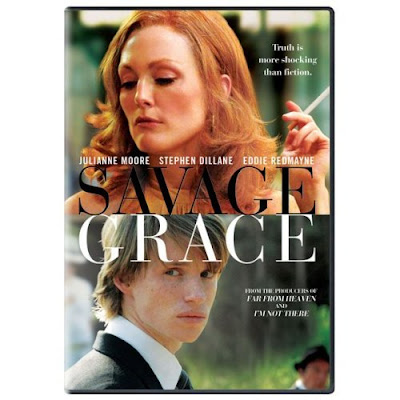 This compelling movie is dominated by two standout performances, Julianne Moore as the very tragic Barbara Daly & Eddie Redmayne as her morally bereft son, Anthony (Tony). I am now convinced after watching this morality tale, that if you need an actress to portray someone who is mentally unstable, unhinged, deluded, scatty, reckless, emotionally fragile; then who you gonna call to convey all of the above? There can only be one choice-the wonderfully adaptable Julianne Moore, whose bravery knows no bounds. Indeed, many a fine actress would have thrown the script out after a few pages, knowing how this story ends up! But in a story like this, Moore needed a suitably brave actor to play against, and Eddie Redmayne is astonishing in his pivotal role as the aimless Tony, just drifting through his vague & empty life, badly needing his father-or a surrogate father figure to ground him in any kind of reality. Stephen Dillane is great as Brooks Baekeland. Even through he left Barbara, this film makes it clear that although he did have a great deal of love & affection for his patently troubled wife, he just couldn't live with her any longer (I know how that feels...).

As well as the fantastic performances, the period settings are wonderfully evoked, giving a great sense of the various era's unique characteristics. The movie is also well structured, never lagging on any particular time period. Everything flows rather briskly, adding to the growing realisation that we are on a journey to hell, wreckage is imminent, just to what degree is the only question!

And when it comes, your just not really prepared. Sometimes, regardless of how well you position yourself, you just cant avoid a situation. Its gonna happen whether you like it or not.
So you watch the last 15 minutes wondering how this ultimately very sad story ends. Hmmm, I could tell you all the details, but part of this films greatness is the way that director Tom Kalin handles the final few acts. They are unflinching, shocking, disturbing, but realistic in the emotional rawness of what might have happened between mother & son. I've checked out a few other sources of information for an indicator of historical accuracy, and although clearly a bit of artistic licence has been used, for the most part, the chain of events isn't in dispute. Its the very nature of Barbara & Tony's relationship that draws the most scrutiny. I don't always believe a movie story of events (JFK-Oliver Stone) but sometimes, some stories are stranger than fiction!

This isn't a comfortable watch by any stretch, but anchored by two brave actors, it is completely compelling in recounting a very sad & tragic love story that is based on real people. That fact is just one reason why I rate this movie so highly.

Definitely approach with an open mind, especially the last 15 minutes...
Posted by Jamie at 11:46 AM