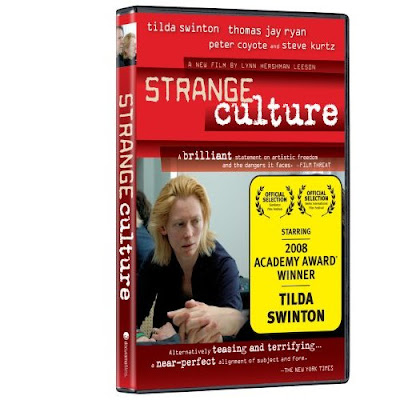 Plot: Docu-drama covering the trial of Steve Kurtz vs U.S govt re charges of bio-terrorism.

Yet another example of what not to do when you order stuff on the Internet that might be slightly suspicious to officials in govt departments! When Kurtz is questioned by the first of many over-zealous stooges you suddenly get a very real sense of what the main issue is. It isn't the bio terrorism charges that matter, its the seemingly too-great-to-pass-up-on opportunity that will allow the U.S govt some much needed leeway for censoring artists in this post 9/11 environment.

If only their timing was a little better. What started this sorry mess unraveling was the very unexpected death of Hope Kurtz. She died in her sleep on an early November morning& when the paramedics arrived, first thing they noticed was tin foil on some windows & a few petrie dishes with bacteria in them. Uh-oh thought one of them, "have we got a terrorist here? maybe that's why his wife is dead!" As most fools know, if you jump too quickly to an assumption-it'll make an ass out of you and me... and so it begins, this descent into an quagmire of lawyers & more lawyers doing their very best to persuade a judiciary that this is indeed the work of a bio-terrorist. Or not.

What makes this David vs Goliath story very entertaining is its narrative structure. Its the very near cousin of American Splendor, in terms of blending acted passages/doco footage & animation panels which elevates it above others of its ilk. This combination makes it very accessible & watchable. No confusion about what is happening on screen, just utter disbelief that it is actually taking place as we speak is another grounding reminder about how this world has changed, post 9/11.

Tilda Swinton & Thomas Jay Ryan are very credible in their roles as Hope & Steve Kurtz, but the real star is Steve Kurtz himself. He comes across as an extremely intelligent, sincere & totally honest person who has been put a position most people wouldn't want to be in.

I for one, hope like hell that this case gets thrown out before it ever has to be considered to be presentable to the U.S supreme court. It will be a sad day in hell indeed if the U.S govt wins this glaring example of an "orchestrated litany of lies"

My smart moneys on Steve !!!

After all, its common sense that should prevail...
Posted by Jamie at 10:21 PM