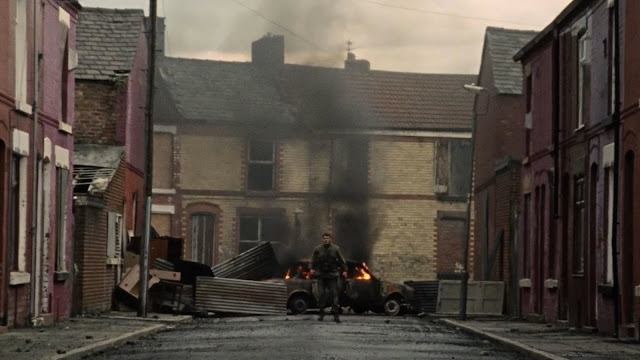 Belfast, Northern Ireland, 1971. When a young British soldier is separated from his squad, the race is on from both friend and foe to find him first.

Tense? Beyond belief! '71 feels less like a recreation than a ringside seat into the hell on earth that Belfast might have resembled to many during this violent era that captured the worlds headlines in no uncertain fashion. Jack O'Connell is fantastic in a near wordless performance that conveys his abject fear and rising confusion about exactly who he can or cannot trust on this increasingly nightmarish evening.

From the innocent opening scene where our soldier is saying goodbye to his younger brother to the ending where a bus is carrying these two away into a glorious golden sunset, you have simply no preparation for the edge of your seat night from hell that private Hook struggles to survive in between these reference points. Every single turn could potentially be his last. Who exactly can he trust? The young but wise beyond his years kid who drags him into a bar? The doctor and his daughter who carry him home - and then call a 'friend'? You feel like you're only a few steps behind him, wanting to shout out, 'NO! not that way! Don't trust him! Go with her!'

This movie is brilliantly executed, flawlessly portraying the ultra-turbulent period with a visceral rawness that is heartpoundingly real, intoxicating all your senses as you, like soldier Hook, realise that the imminent danger lurking on these dangerous streets is not a bad dream, but a hell you must negotiate as quickly as possible if you want to live longer than this very bad and very long night.

Quite easily, '71 is one of the finest thrillers I've watched in a very long time, and this is down to one key element. It feels absolutely real.