Whats it about? Hell descends upon a small town when a Metal lovin' dude unwittingly records a song that turns the good townsfolk into zombies!

It is no exaggeration to say that as of right now, we are experiencing a golden period of Kiwi film making. For so long we've made made ok-ish features, with a few exceptional films justifiably gaining international acclaim and awards. The weakest perceived link was the writing, which often couldn't match the stunning cinematography, consistent great performances, and assured direction.
With films like Housebound, The Dead Lands, The Dark Horse, What We Do in the Shadows the writing, however, has been elevated to another level.

Make no mistake, the script/storyline on Deathgasm is damn near note perfect, with first time Writer/Director Jason Lei Howden (ex Weta Workshops) drawing from his own heavy-metal loving past to assemble a rip-snorting tribute to the horror-comedy genre that is both affectionate and funny as hell! The cast are up for the task at hand, delivering performances which totally complement the onscreen action. It's patently obvious to all that they're having a blast with their roles, taking their characters on one hell of a wild joyride.

But you don't want to hear about the writing, what you really need to know is the following aspects. 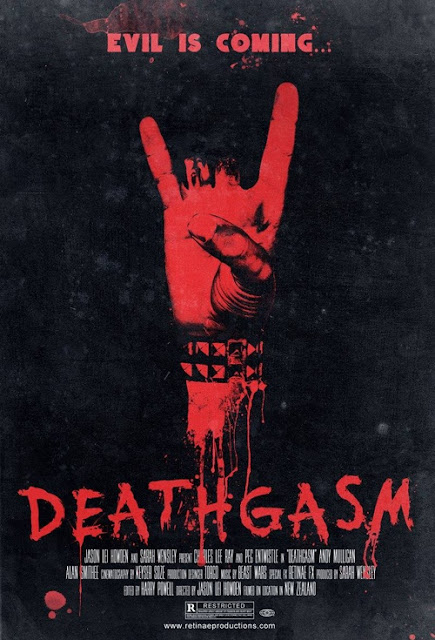