Synopsis: A time traveling hit-man faces the ultimate moral dilemma when assigned by his mob boss to kill his future self - by going back in time and killing him - before he becomes a problem to them . Nothing then, is what it seems as he races to find a solution to this inconvenient situation. 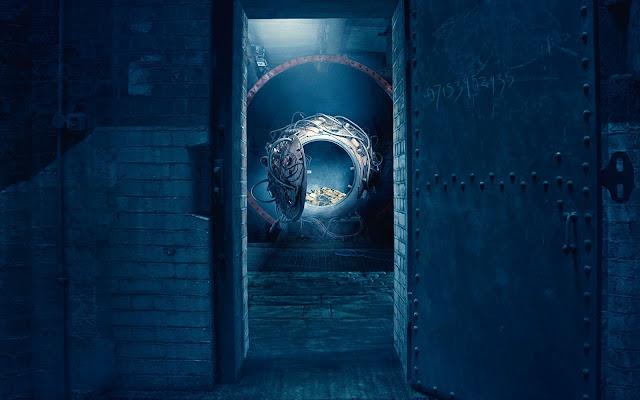 My interest in this time-twister was piqued when I first heard who the director was - Rian Johnson. He first came to the film worlds attention with the critically acclaimed 2005 movie "Brick". It was a film that had that special thing which made it unique. An 'X-Factor'. Although heavily set in the film noir milieu, Brick was a revelation with its unconventional approach to the form. One key factor was the fantastic use of daylight in many key scenes - an aspect which upended many traditional notions about film noir. This deviation from the norm worked superbly in the context of this movie, but it also made you aware of the fact that Johnson was going to be a talented director worthy of following for any future projects he aligned his considerable abilities to.

Alas, his follow-up film - 2008's "The Brothers Bloom" didn't strike a chord with the movie going public - disappearing quickly to rental purgatory (Or perhaps, its natural home?). Too quirky and uneven for many, it still has a legion of fans attracted by its surreal touches and sumptuous visual tone. Probably now is a good time to rediscover this forgotten gem. Movies such as these are like fine wine - they just have to bid their time before they are palatable to the masses. Maturing does not come quickly for the most part! Maybe however, Brothers Bloom's misstep was a fortuitous piece of serendipity? It allowed Johnson to go back, take stock of the things that didn't work so convincingly - and apply his new found wisdom to the next project - clear in his mind about the kind of film which would make people still believe that 'the kid has talent'. Again.

I deliberately don't want to reveal any of the story, but I will comment on the actors - and their impact on this film. Firstly, Joseph Gordon-Levitt is well cast as the smug hit-man who unwittingly develops a moral conscience when confronted by his rapidly altering reality - of which he increasingly is unable to extricate himself from. From the outset, you know that he will meet the Bruce Willis version of his character at some point. So its more than amusing when he adopts some of Bruce's visual stylistic features - specifically the Willis smirk. But, in this movie, it actually works! Prosthetics help a great deal as well in making you believe that this is indeed, the younger Willis character - not as how we perceive Gordon-Levitt's onscreen persona. Willis isn't too challenged by his role, but regardless, he is eminently watchable in this movie. Jeff Daniels clearly channeled 'The Dude' (Cohen fans rejoice!) in his role as the weary mob boss. Not a stretch for a man of his talents, but clearly playing it for fun. Emily Blunt was a foul-mouthed revelation, with her convincing American accent, and her single mom character which is not her usual type of role. More of this in future roles please Em! Lastly, the kid - Cid. The young actor (Pierce Gagnon) who plays this pivotal character will be a person of great interest for whatever he turns his latent talent to in years to come. Its all in the eyes. This wunderkid has a staggering intensity which will serve him very very well. Watching him grow as an actor will be fun for any film fan.


Looper is another brilliant addition to the canyon of great science fiction. Its time twisting narrative never runs away from itself at any stage, Johnson even has the cheek to put in a very good line about time travel in which Bruce Willis conveys with just the right kind of delivery and attitude to make it work - and not seem cheesy. Bravo, indeed.

From the outset, it is abundantly clear, that Johnson has made an extremely unique movie that will not only stand up this year - its status will be assured for a very long time to come.

I agree with your observations on Pierce Gagnon, he was absolutely fab!!!