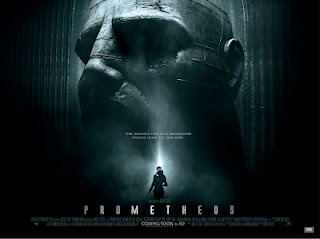 Official Synopsis:  Ridley Scott, director of “Alien” and “Blade Runner,” returns to the genre he helped define. With PROMETHEUS, he creates a groundbreaking mythology, in which a team of explorers discover a clue to the origins of mankind on Earth, leading them on a thrilling journey to the darkest corners of the universe. There, they must fight a terrifying battle to save the future of the human race.


If I was told to make a choice about only one movie to watch this year, then this new film from Ridley Scott is the one I'll crawl over broken glass to watch! Just why do I sound so excited about this particular movie? Especially when you factor in the minor detail that I haven't even seen the damn thing yet!

A) Its Ridley Scott directing.
B) Its Ridley returning to SciFi!
C) Its set in a similar 'universe' to the one he created 30 odd years ago
D) The script is co-written by Jon Spaihts (The 'go-to' guy at the moment)
E) HR Giger has some involvement (Hey any will do fine by me!)
F) The cast is damn near perfect

These are just a few of the reasons why, but let me elaborate in far greater detail. Get a hot drink before you start reading further though. It might take me a wee while to explain just why you too, should make this a must see movie on the big screen!

While the sequels to the original Alien movie made for varying degrees of entertainment, Ridley always felt they missed a fairly significant opportunity to explore the mysterious 'Space Jockey' (Which HR Giger created from that genius imagination of his) and specifically answer these seemingly vital questions: Who was he? Where did he come from? And why was he there - (Crash landed?) on LV426? Ridley lamented that these sequels could have at least attempted to even hint at this beings otherworldly origins, but in acknowledging this oversight, it gave him time to think about finally answering those burning issues that needed some kind of closure.

With that seed planted firmly in his visionary mind, he started on the track to formulating a prequel (Alien 5) that would provide the exact answers he himself was looking for. However, not long into this project it became rapidly apparent that this approach was possibly short sighted. The more he thought about his intended central idea for this project, the more he realised that a bigger story was of greater merit. Just explaining about the Space Jockey was the easy route, increasingly he said to himself, what if... what if...what if indeed? So he came into contact with the new hotshot script doctor, Jon Spaihts (who was the golden boy in 2010 for his unfilmed screenplays that were at the top of the pile to be made into films) to jointly explore the different path that this new project could continue on. Immediately, they both agreed that telling the Jockey's back story was not challenging enough. What if they delved into another universe completely? And explore grander themes? Themes that would more than likely tie back into the crash landed Jockey's origins, but ask bigger questions about the exact race of beings that had such a  deadly cargo on-board. Enthused by this fresh & invigorating development the pair collaborated frequently, passing the storyline between each other, adding/deleting various scenarios until they were confident that they had a storyline that would both complement all the previous work presented onscreen, but take the intended film to another level entirely.

Enter Damon Lindelof. Sensing that both he & Spaihts had reached a point where they needed a fresh pair of critical eyes to be cast over this epic deviation, Scott brought in the 'Lost' wunderkid, immediately putting his finely honed & inimitable myth telling abilities to work - eager to see if Lindelof could find anything they might have missed - or not thought of, least their enthusiasm overtook them. Indeed, getting Lindelof on the good ship Prometheus was quite possibly a master stroke, for he was undoubtedly fired up with a respectful desire to work with a master director of Ridley Scotts calibre. Who wouldn't pass up this once in a lifetime opportunity? Certainly not Lindelof, injecting/infecting the established pairing with various new ideas/concepts that most definitely have made their presence felt in the shooting screenplay.

As any film fan will know, the two most important aspects regarding a new films success or failure rest upon these critical elements. A fantastic story - and a brilliant cast to translate that story convincingly. If you don't get these absolute fundamentals right, well... you end up with a big pile of unwatchable crap that pleases no-one, and makes no money. Having got the story to a point where all the major players concerned felt more than happy with, the next step was to see which actors could bring these characters to life as they had envisaged them on paper. And if you've seen any of the many trailers & previews out there, then you'll know that the executive team have chosen well. Very very well in fact, particularly when it came to casting who would play the ships veritable paranoid android 'David'. Michael Fassbender is without doubt, an inspired choice, his mannerisms/behavior/actions seem eerily real, not unreal in any sense whatsoever. The other casting that I'm intrigued with is Charlize Theron. From what I've seem thus far, I suspect that her role as the shadowy corporate Weyland suit, sent to keep things in line on this expedition, will be of immense interest.  The later stages of the movie hint at major developments for her Meredith Vickers character, possibly not in the most benevolent of ways either!

Another critical factor in convincing an audience is the authenticity of the set/s which depict the environment in which the story is unfolding. Thankfully, Ridley Scott is hardcore old school when it comes to matters like this and made the fortuitous decision to create life sized sets for his cast to work in. The feedback from the key actors thus far are more than encouraging, suggesting that we too, will be blown away by the visual aspects of this seemingly seminal sci-fi film. Indeed, when Lindelof first visited Ridley, he got a privileged sneak peek behind the curtain, peering into the room where long time Scott collaborator Arthur Max was beavering away with a small but select group of dedicated disciples, creating the foundation stones of this fantastic new epic tale.

The score is increasingly becoming an integral part of the movie experience, centering the audience in the films environment is a key factor in delivering the intended realism that great directors clamor for. Choosing the right composer to complement the sublime images that Scott & his talented team have produced will significantly enhance the film goers experience. So, upon hearing a preview on iTunes, the scary & dramatically imposing score by Marc Streitenfeld  has stoked my anticipation immensely. Immediately, you get an absolute sense of the intended feel of the movie, not a note seems out of place. Of course, this is all before the fact of actually viewing the film in the first place, but hey, our gut instincts are usually right in matters like this!

In fact, that is the best way to end this preview. My gut instinct is this. For me, without shadow of a doubt, Prometheus will become the following...

ONE OF THE ALL-TIME GREAT MOVIES!

It will be of the greatest interest (Not just for me, ok!) to revisit this statement not only after watching the movie, but in the years to come, to see whether I'm unequivocally right - or absolutely wrong on this specific matter. Time will tell. We shall see, etc, etc!

My money is on myself being proven right of course...