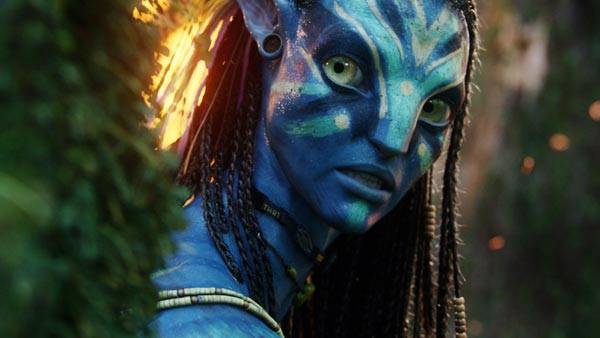 After all the hype, its finally here. James Cameron's new movie "Avatar" has arrived to massive expectations-primarily about its much vaunted 3D technologies that Cameron has developed specifically to realize his vision of the world of Pandora and its inhabitants. To say that I've been looking forward to this would be an understatement of some magnitude. Any time a big event movie such as this comes along, then count me in for being one of the first to a screening. Still a big kid at heart I guess...

So, obviously the key question is... Is it any good? Does it live up to the hype-or not?

One of my key criteria for enjoying a movie is believing that the world the filmmaker creates is one that is real and will completely immerse me in it for the length of the running time. It then doesn't matter about such trivial details such as plot, character development does it? heh heh, you know that's not true-but anyways...

Firstly, without hesitation-go and see this movie in 3D. You will believe that you are on Pandora! And what a world Cameron and the super-talented people at Weta, Digital Domain have conjured for us to feast upon. Totally indebted to the fabulous artwork of Roger Dean without any doubt whatsoever. Go and look at a YES album cover-or "Google it" to see what I'm saying! It is surprising to me that in all the other reviews worldwide-no other reviewer/critic has picked up on this coincidence (Or not!). Or maybe its because of my age that I'm old enough to remember YES in the first place... Back on topic.

Although the visuals are absolutely stupendous, Cameron hasn't forgotten the rudiments of great film-making which is to create a compelling story-and characters that we both feel for-and believe in their destiny or fate.
To achieve this goal, you need to cast wisely-and get actors that will look and feel like a real life person. If they (Actors) are well cast, then your not watching an actor-your watching the character. So casting a relative unknown (By Hollywood standards) is a sometimes risky manoeuvre for an unwary director. Many notable directors have rued the day they choose a supposed marquee A-List actor, to find out that that person in retrospect, wasn't the right choice. Aint hindsight a wonderful thing? Sam Worthington is Jake Sully. He is both A) Good enough for the role, and B) feels credible as person grappling with a complex set of decisions to make about his future-and all that he believes in in his present situation. Sure, sometimes a line (Or two...or three!) of dialogue may be slightly cliched, but in the overall context, it doesn't really matter because moments later, an action scene will start-and that corny line is quickly forgotten. Stephen Lang as Colonel Miles Quadritch is a major revelation. Apparently Michael Biehn did have some preliminary talks with Cameron-and even traveled to New Zealand to check out production work a couple of years back. But, Cameron decided after signing on Sigourney Weaver, that having two ex-Aliens cast members in this movie was one too many! As much as I would love to have seen Biehn in another major movie, this was inspired casting by Cameron to get Stephen Lang on-board. He totally embodies the hard nosed military madman with supreme ease. We definitely aint in Kansas anymore! Again, although Quadritch may have a cliched line (Or two-again), Lang delivers those lines with such powerful conviction - that you soon get over yourself about such trivialities. Sigourney Weaver is, as to be expected, tough, no-nonsense-and completely idealistic about the interactions with the local indigenous population, the Na'vi. Giovanni Ribisi is perfectly cast as the company bad guy! He has the Paul Reiser role from Aliens down pat! And the other human characters are not just window dressing either-all the various actors are credible in their respective roles.

But the crucial part was the Na'vi. You can see where a big chunk of money has gone. The Na'vi look, feel and act like they are very real characters. The actors that did the groundwork for these roles (Zoe Saldana, Wes Studi, CCH Pounder, Laz Alonso) all did remarkable jobs to emphatically embody the specific Na'vi characters they play. I now believe that a race of creatures like the Na'vi could conceivably exist somewhere out there in the universe. The attention to detail is simply staggering. Hats off to Cameron for putting the time & effort into developing this most crucial aspect. If he didn't, then we wouldn't have a movie. Now, we can understand why he said that he couldn't have made this movie 10 years ago. The technology wasn't at the point (then) to realize his vision properly. Thank the gods he waited! Its been well worth it Jim, absolutely...

The storyline is both straight forward-and clear for this kind of movie that is so visually driven. To have a cast of many would have bogged the story down unnecessarily. So, we cut to the chase-to follow the hero (Jake) on his quest to right some wrongs-and win over the local princess while he's at it! Its all you need to know before you go and see this movie.

But, without a shadow of doubt, the biggest thrill for me was seeing the spectacular world of Pandora-and its stunning native fauna & flora. My god, oh my god. What a planet! I now, want to ring Richard Branson and say-forget about suborbital flights. Build a really big (and light-speed fast!) spaceship to take me to Pandora-or another world like it, PLEASE! Today preferably! (I mean, C'mon Richard-Mr Emmerich has already foretold the end of the world!). I too, want to run through towering trees, climb precarious rocks, swim in luminescent rivers-and be at one with nature. I'm already feeling closer to my cat (Not that close!). I know I'm going to want to see this movie many times-just for those reasons alone.

My final thought is this. My favourite film of the decade was Almost Famous. Now, with merely days left till the next decade, James Cameron has made AVATAR my new number one movie of the decade. I simply can't wait for parts 2-and 3. Trust me. They will be made. He didn't create all this just for a 'once-off outing'. Stay tuned...