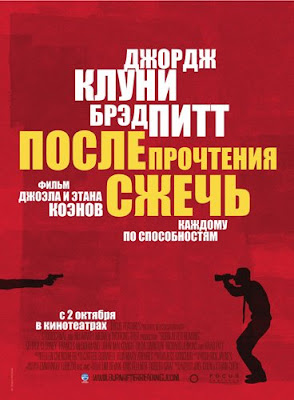 Plot: A couple of Coen Idiots find what they think is the keys to a kingdom of their future-Supposed C.I.A documents that might be worth a buck or breast augmentation or 2 by holding the author to ransom. Bad move-Oz Cox is not a happy man upon this unforeseen development-which started with his cheating bitch wife. Then Harry Pfarrer gets involved and things really start to go outta control !!!

This is easily one of my most conflicted reviews thus far. I am, for the record, a HUGE Coen brothers fan. Their movies are always totally unique. No-one else really comes close to making the kind of movies they do. Its always hard to nail just exactly what are the key reasons why their films are so different, but maybe one clue is their treatment of characters. What they do, how they act in any certain situation, how they look, dress-hell, even hairstyles are eventful in the Coenverse (my shorthand for Coen universe!), the characters are always totally compelling.

So, obviously, coming off the back of one THE most critically acclaimed movies of the last year (The brutally savage "No country for old men"), expectations were not unreasonably high given the tantalizing array of talent on offer. A veritable coenesque mix of the old (Clooney/Mcdormand/J.K Simmons) and the very effective new (Malkovich/Pitt/Swinton) seemed to be a damn near perfect acting ensemble that couldn't really fail... A concept involving spies, cheaters, losers, dickheads, idiots, foreigners & other sundry character types that olny appear in the Coenverse, how the hell could this puppy be anything other than completely loveable? Hmmm and hmmm.... Perhaps, I should jump to how i feel about this now. Again, for the record-I NOW LOVE THIS MOVIE!!! So, what has happened inbetween to make me see the 'error' of my ways? Time is probably the biggest factor. Certain movies, like certain songs or books (or name your own thing!) benefit from the passage of time. Think about movies like "BladeRunner", "2001" "Casablanca" or albums like...(bugger me-i just cant recall at this point in time an example of a massively popular album which was critically reviled at the initial release, but I digress..) Anyways, like a good bottle of wine which gets better after ageing, some movies don't totally convince upon first appearances, but the more you look back, after a time, the better they reveal their undeniable genius to us properly. Burn after reading falls into this type of category because its not an undisputed masterpiece like "Fargo" or "No Country", but it slowly but surely works its charms on you as most Coen films do. Cmon, and admit this to yourself- Ladykillers & Intolerable Cruelty are more than worthy! Sometimes the best way to judge a filmmakers career is by the number of perceived 'failures' that they have over the course of time. No-one is infallible, everyone is capable of making a turd burger or 2. Its the type of turd that defines your legacy to a certain degree.

So here's my selective highlights of this minor-key gem!

Gorgeous George Clooney. Rounding out the last of (in his own words) "Trilogy of Idiots" for the Coens (O Brother/Intolerable/Burn) in fine style, even though I did really wonder about the basement invention. My jury's still out on that particular detail. Liked the fuzz as well George!

The brilliant scenes between Oz's superior (David Rasche-"Sledgehammer" TV Cop show from 90's) and his laconic superior, the always watchable J.K Simmons. The two of them are great on their own, but together-truly Coenesque !!!

The scenes at the Russian embassy. Only the Coens can do that kinda stuff and get away with it!

The Malkovich. One of his best roles ever. The rage was exciting to watch being unbottled & unleashed to all and sundry!

If your a true Coenesque fan, you'll learn to love this movie in due course. Everybody else can ignore all the hype & criticism and just enjoy the movie on its own terms. It is funny...
Posted by Jamie at 10:36 PM