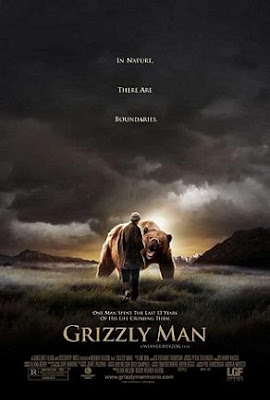 PLOT: Man vs Beast takes a bizarre & ultimately tragic turn in this compelling train wreck of a documentary from that determined and persistent German director, Werner Herzog.
The life & times of amateur Eco-activist Timothy Treadwell is recounted, with numerous footage from his own video camera, recording behaviour that is beyond fascination. Surreal doesn't even come close.

The life of Treadwell, grizzly bear 'activist' is shaped into a very powerful story of how mother nature needs to be respected at all times. By ignoring the basic laws of nature, Treadwell's story was always going to result in in nothing less than complete and unnecessary loss of life. What makes it so compelling is the unbelievable raw footage that Treadwell shot over many years & the interactions he had with the grizzly bears of the Katmai National park in Alaska. To just about any seasoned grizzly bear expert, the one thing not to do is engage directly with the bears. Observe from a distance, but don't get too close. Seems entirely sensible & logical to to 99.9% of the human population, but alas Timothy had other more radical ideas. Operating on the mistaken belief that these bears were endangered (they were in a protected national park), Treadwell ignored all basic safety principles to get really close as possible. In fact, you really just have to view this movie to see the things he did with the animals. If i told you, you would probably just either laugh or totally disbelieve me. But Treadwell actually did do all these crazy things because he recorded it all. For us to stare in absolute utter amazement & marvel at the rather extraordinary activities happening before our very eyes.

Herzog interviews various people associated with Treadwell to try and understand why he was committed to putting himself in such a unique & dangerous position. What were his real motives for doing what he did. But as much as the other talking heads shed different views on his motivations/philosophies/beliefs, the most revealing footage is unequivocally Treadwell himself.
And knowing that he is the star in his own show, Treadwell doesn't hold back on showing a increasingly bizarre range of emotions that range from amusing to outright bloody insane !!!
But i do have to say that i did respect Treadwell for his bloody minded attitude & ability to interact with these wild creatures that probably very few people would ever attempt to do.
Balls of steel didn't save him ultimately (and most unfortunately his girlfriend Amie Huguenard), and that it was preventable is possibly the real tragedy.

By the end of this movie you come to two obvious conclusions.

A) He wanted to be immortalized. He achieved that without a shadow of a doubt.
B) Werner Herzog was the only person who could do his story justice.