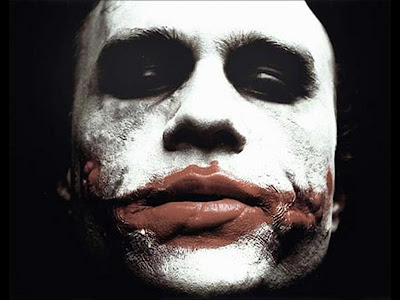 Plot Synopsis: The Bat finds out that cleaning up the streets too effectively can actually be counterproductive, especially when he's up against the Joker whose only modus operandi is "maximum chaos".

This sequel explores very different territory to the first movie, in fact I would say that more emphasis is rightly on the various relationships Batman has with various people in his world - good, bad and definitely "otherwise". It's the conflict of what exactly is the right thing to do at times that drives this excellent sequel to levels of near greatness. We've never really seen the Bat ever get this morally conflicted before, and Christian Bale's performance is near flawless in his portrayal in this particular outing.

Gary Oldman is far more layered in his performance, Aaron Eckhart is very believable as Harvey dent, Bale I mentioned previously, but obviously all the pre-hype surrounded Heath Ledger's performance as the Joker. In some circles, he's been suggested as a possible Oscar contender. Is he that good? IMHO, yes he is that damn good. He is simply mesmerising every time he's on screen. This is one of the most definitive villain portrayals in a very long time. But crucially, he doesn't overwhelm the movie either. Simply put, the Joker is the Joker. You don't need to really know who's playing him, the performance is that good. The fact that it's Ledger's last really complete movie is not the point.

This film is one of those rare things - a sequel with substance that actually builds on the first movie, and expands it into far more darker territory altogether. Without doubt, I'm now eagerly awaiting the next instalment (Which is rare for a 2nd sequel), but the bar has been raised considerably by Ledger's portrayal of the Joker.

And lastly, it has had plenty of criticism regarding the running time. I didn't feel the need to look at my watch once. But maybe, I'm just a sucker for long movies...
Posted by Jamie at 11:26 AM

Nice review. Loved the film too.