Indiana Jones & the Kingdom of the Crystal Skull 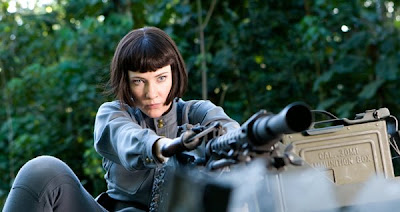 Sequels: Love 'em or hate 'em?
I have just finished taking a quick squiz at some of the customer 'reviews' about this movie (On Amazon.com) and I can only come to one conclusion. Sometimes we can get far too bloody precious about movies! Its shouldn't be a surprise to tell you that we'll have certain preemptive perceptions before we actually see the damn thing!

With certain types of genres & movies, we have general expectations of what we think we will see. Certain genres follow strict (Hey, I am generalizing here-bear with me!) guidelines on the individual crucial aspects that make a genre film what it is. A good example is "Brick" (From 2006; director-Rian Johnson). Although, it is a 'Noir' type film, it plays around with the purported genre very successfully. And I'm going off-track here, so back to Jonesy & Co...

And thus we come to Indy 4. For the record, I loved it. It entertained me from start to finish. I didn't look at my watch once, or drift off thinking about mundane things like what to have for dinner, etc, etc! Is it not the job of a movie to - at the very least, either entertain or maybe, educate you? Generally speaking that's what most movie directors are aiming for. To entertain the audience for the length of the movie. Nothing more, nothing less. Its a noble ideal that most directors aspire to. For me, its been so long since the last one (1989) that my initial expectations were set fairly low. I mean we already had suffered the immense disappointments of the underwhelming Star Wars prequels, so it was a kinda nervous anticipation with this movie.
Thankfully, my reservations were misguided. It is just as good as the other three. If I remember correctly before Lucas & Spielberg started on "Raiders of the Lost Ark", their intention was to pay homage to the rip-roaring action movies that had enthralled them in their teenage years.
So they weren't aiming for high art, just damn good entertainment. On that level alone, they've succeeded very well.

The story sees Indy dragged into yet another all too familiar scenario: Bad guys want him for his knowledge of certain things & his expertise in tracking them down. This time the bad guys are the Russians, led by the very sexy with her black bob haircut Irina Spalko-played with style by the always more than watchable Cate Blanchett. In fact, maybe this would be one of the sexiest roles she has done thus far in her stellar career (More Cate, please !!!) Also early in view is a new sidekick, George 'Mac' McHale, played with a boozy Oliver Reed-ish charm by the charismatic Ray Winstone. Mac immediately makes his intentions clear to Indy by selling him out to the Russian's. After escaping from the Russkie's, Indy inadvertently wanders into a picture postcard perfect American town. Then a warning sounds, announcing a countdown. Bugger! it would be a nuclear test that is imminent. Where does he go for shelter? Hmmm, the result is both funny as hell-and completely over the top! Would love to see this one on MythBusters. With Indy now having motivation to do something about his current events, they introduce the new heir to his throne, Shia LeBeouf as "Mutt" Williams. His entrance is my only real quibble-and that's because its such a rip-off of an iconic actor (& his character) in an classic movie. You movie fan's will spot it in a heartbeat. But, hey, once I got over myself about this blatant act, I could sit back and enjoy his performance. Sure, not the best role the youngster has ever done, but it is early days in his career. Then, we get on the plane and journey to far-off lands to search for mythical treasures, rekindle relationships (a wild-eyed John Hurt is always amusing), fight plenty of bad guys ( plus one sexy girl-did I mention that previously?), fight them damn natives and oh, what Indy movie wouldn't be complete without some supernatural type element thrown in for good measure.

You can, if you really try, and imagine how this movie pans out. Will Indy live to have another adventure before the iconic fedora gets hung permanently on a post somewhere in the future?

Movie magic can happen anytime. The only thing that really dictates in that town is the minor detail of just what number of zero's is the right number next time.
Posted by Jamie at 8:47 PM